Travel: Journey to Birmingham: I travelled by plane. It was my first time traveling by plane, so obviously I was a little bit scared. However, Jorge (who is the boy that also went to England with me) calmed me down and, in general, it was a pretty good flight.

Journey from Birmingham: I travelled once again by plane but this time I was feeling more relaxed and it seemed that the journey didn’t take that long.

First impressions: We arrived in Gatwick, London at 12:30 and the amount of people we saw right there in the airport was impressive. As we left the airport and even though we didn’t see much of London, it felt just like we see in the movies: amazing (but really cold, though)!

Landscape and climate: It has an urban landscape with a lot of similar houses, restaurants and buses just going around the city. The weather in Birmingham is awful, I must admit. It was windy, cloudy and rainy all the time.

Houses (similarities/differences): The houses are totally different from the ones I’m used to here in Portugal. They are all really similar and inside they are a little bit small compared to the ones in my country.

What did you do on Saturday? On Saturday we got to the airport at 8:00 am, as we were already in Porto. Our flight was at 10:00 am and we arrived in London at 12:30 a.m. After we landed, we had to get on the train to Euston Station and once we arrived there, we had to go on another train to Birmingham International. It was about 5:30 pm when we finally arrived in Birmingham. My host picked me up and we went home. That evening, I met her family, which I really liked from the beginning because they are Portuguese as well, and then we went to a restaurant where we bought Fish and Chips, the traditional England food. Later that night, we watched a movie and then I went straight to bed.

Best part of your day: Arriving in London and getting to know Joana and her family.

Worst part of your day: All the trips we had to make by train made me really tired.

Food and drink: I ate a tuna sandwich and drank a fruit juice in Euston and for dinner I had Fish and Chips and drank some juice as well.

What did you do on Sunday? On Sunday, we woke up quite early. We dressed ourselves and got ready to explore the city and do some shopping. Joana took me to the most interesting places in Birmingham and I really liked it. It’s a very big city with a lot of people from all around the world, which I thought it was great because I got to meet different cultures and people.

After that, we went home and had lunch. Then we decided to stay home that afternoon and in the evening I went grocery shopping with Joana and we had dinner.

At night, I helped Joana with her homework and went to bed quite early, since I was feeling tired.

Best part of your day: Getting to know the city and having some bonding time with my host.

Worst part of your day: There was no such thing!

Food and drink: At lunch we had egg on toast and for dinner we had an amazing salmon and potatoes!

What did you do on Monday? In the morning we had classes and I finally met all the participants in the project and got reunited with Jorge. Then the programme students had a conversation with the teachers and a student showed us the school facilities, which are nothing alike to the ones in my school. We also attended to some classes and at 12:30 we had the European lunch in the library, which consisted of traditional food of the countries involved in the programme.

After one more class, I went to meet my host and we all went bowling, which was an amazing experience, since I got to know my partners a lot better.

After that, me, my host, a polish girl and her host went to a pizza place and we went home afterwards.

Best part of your day: The day in general.

Worst part of your day: None!

Food and drink: For lunch we had the European lunch, in which we tasted a little bit from every country. For dinner, we had the most delicious pizza I’ve ever had in my life!

What did you do on Tuesday? On Tuesday we went to school. Then a bus was waiting for us to take to Stratford. There we could do some shopping and buy souvenirs for our families. We had lunch and then we went to school again. I said goodbye to all of them, which was hard and went home with my host. I started packing my bags because I was leaving to London later that night, and I had the last dinner with the family.

At 9:00 pm I said goodbye to my host and her family and went to the station, where our teachers were already waiting for us to get on a train to London. By the time we arrived there, it was almost 2:30 am.

Best part of your day: Going to Stratford. 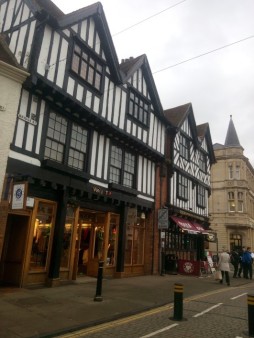 Worst part of your day: Saying goodbye to my partners, my host and her family.

Food and drink: For lunch I had sandwich, chips and a juice. For dinner, Joana’s mother made us an awesome fish pie.

School day (similarities/differences)? Their school day is very different from ours! Firstly, their classes are in general more interactive and don’t last as long as ours. Then, they all have to wear the school uniform. Their subjects aren’t the same as well.

Best part of your trip: The European lunch, bowling and pizza!

Worst part of your trip: The exhausting train journeys between Birmingham and London.

Your final impressions: It was a lifetime experience that I will certainly never forget. Getting to know my partners and exchange opinions and ideas about different subjects was amazing, as well as dealing with their cultures and habits. My host and her family were the sweetest and spending time with them was absolutely priceless. Lastly, knowing such a different city that concentrates so many different people made me grow as a respectful individual.